Allergy Meds- the quest for the best antihistamine

Junior’s nose is starting to twitch

His nose and his eyes are starting to itch.

As those boogies flow
You ask oh why, oh why can’t he learn to blow?

But the influx of pollen is no fun.

Up at night, he’s had no rest,

But which antihistamine is the best?

It’s a riddle with a straight forward answer. The best antihistamine, or “allergy medicine” is the one which works best for your child with the fewest side effects. Overall, I don’t find much of a difference between how well one antihistamine works versus another for my patients. However, I do find a big difference in side effects.

Oral antihistamines differ mostly by how long they last, how well they help the itchiness and their side effect profile.  During an allergic reaction, antihistamines block one of the agents responsible for producing swelling and secretions in your child’s body, called histamine.

The oldest category, the first generation antihistamines work well at drying up nasal secretions and stopping itchiness but don’t tend to last as long and often make kids very sleepy.  Diphendydramine (brand name Benadryl) is the best known medicine in this category.  It lasts only about six hours and can make people so tired that it is the main ingredient for many over-the-counter adult sleep aids.  Occasionally, kids become “hyper” and are unable to sleep after taking this medicine. Other first generation antihistamines include Brompheniramine (eg. brand names Bromfed and  Dimetapp) and Clemastine (eg.brand name Tavist).

The newer second generation antihistamines cause less sedation and are conveniently dosed only once a day. Loratadine (eg. brand name Alavert, Claritin) is biochemically more removed from diphenhydramine from than Cetirizine (eg. brand Zyrtec) and runs a slightly less risk of sleepiness. However, Cetirizine tends to be a better at stopping itchiness.

If you find your child’s allergies are breaking through oral antihistamines, discuss adding a different category of oral allergy medication, eye drops or nasal sprays with your pediatrician.

Back to our antihistamine poem:

Too many choices, some make kids tired,

While some, paradoxically, make them wired.

Maybe while watering flowers with a hose,

Just turn the nozzle onto his runny nose. 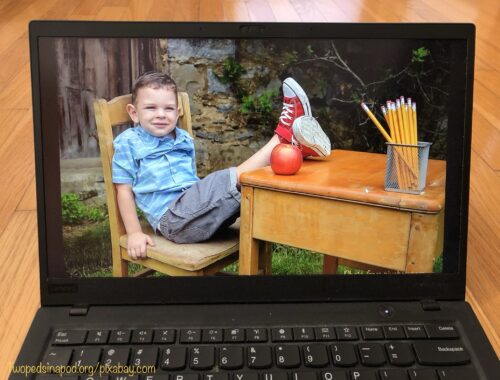 Going back to school online? Here’s what pediatricians want you to know

All about strep throat