Sippy Cups are not a developmental stage, revisited 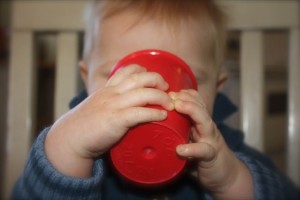 Ah Ha! Little did we know when we wrote this post back in 2010 that a study of injuries related to sippy cup, bottle, and pacifier use wrapped up that same year. The results, published in the  journal Pediatrics in May 2012, showed that sippy cups were a significant source of injury in children. Most commonly they caused mouth lacerations in children who fell while drinking out of the cups.

At a baby’s six month old check-up I advise parents to have their child start drinking from a cup.

Some respond with surprise,” A cup? So young? How exciting! Do you mean a sippy cup?”

Then I get incredulous looks. “But how will our baby manage that?”

Just like your baby “learns” how to eat food off a spoon, she will have to practice. You will have to help her at first. Just put water in the cup. Who cares if water spills? You see how by this age she naturally puts her hands together and pulls most things to her mouth. With practice, she will learn to drink out of a cup. Just like everyone else did before sippy cups were invented.

“But when,” parents ask me, “should we introduce the sippy cup?”

The reality is, sippy cups satisfy a parent’s desire to be neat and to avoid mess. Sippy cups are not a developmental stage. Did I use sippy cups with my own kids? Yes I did, especially with my twins, because anything I could do to decrease mess in my home I welcomed with open arms. But it is perfectly okay to never introduce sippy cups to your child.

Because sippy cups are spill-proof, it is tempting to leave one out all day for your child. If the cup contains water, this practice is safe. However, many toddlers have ended up with a mouth full of cavities in their brand new baby teeth after sipping milk or juice all day long out of sippy cups. Constant sweet substances on the gums can sink in and affect baby teeth. Just as we advise parents of bottle fed babies to avoid allowing the child graze from the bottle all day and to avoid falling asleep drinking a bottle, young children should not be drinking sugar-containing drinks, including milk, all day from a sippy cup.

“But I only give my kids water mixed with a tiny bit of juice in the sippy cups,” I hear parents say. Yes, kids (and grownups) need water, but watered down juice is not the same as plain water. Watered down juice is sugar water, and it harms teeth just like straight-up juice. In addition, drinking watered down juice teaches kids that all beverages need to be sweet. Sweet drinks do not actually quench thirst; rather, they make kids feel thirstier. Remember that unlike adults, babies and toddlers have not formed unhealthy habits yet, so teach them that water and milk are for drinking. The only exceptions are electrolyte solutions that are used to prevent dehydration during vomiting and juice once a day (prune, pear, or apple) for constipated children. For nutrition, fruit is much healthier than fruit juice.

So put water in the open faced cup and allow your baby to imitate you and drink out of it. Then, around your child’s first birthday when most parents wean their children from breast milk or formula to cow milk, put the “big boy milk” or “big girl milk” into a cup. Aim for all open cups by at least two years of age. If you decide to use sippy cups, as I did, for neatness sake, do not forget practice with a regular cup. Get rid of the sippy cup whenever you are tired of washing those moldy valves and tired of rescuing them from your drain or garbage disposal. You might have a “sippy cups are for car rides” policy and use open cups at home.

All kids are messy. The younger you practice with your child, the sooner she will be drinking out of a regular cup like a pro. Just in time for finger feeding which means self-feeding—more mealtime mess!