Ear wax in your child: what to do with the goo 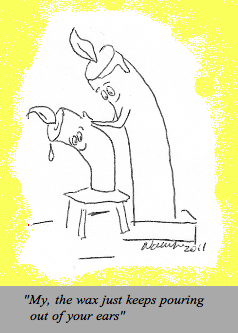 Babies are gooey. Spew tends to dribble out of every orifice and the ear is no exception.

Devin’s mother tipped her four month old baby’s head sideways in the office the other day and asked me what to do about the oily, yellow wax smeared around the opening of his ear canal. Despite the copious amount of wax on the outside, Devin’s ear canals were clear. “But the wax is simply disgusting,” said Devin’s mom, “Can I clean his ears? “

If you can get the wax with a wash cloth, it’s fair game. Otherwise, leave it alone. It doesn’t matter if you use a wash cloth or cotton swab.  The special shaped cotton swabs with the safety tips are unnecessary. Rest assured, you will not go too deeply into the ear canal if you only scrape off what is visible.

Now suppose your pediatrician does say the wax should be removed. Place an over-the-counter solution such as Debrox in the ears (children and adults can use the same formulation) – three to four drops one or two times a day (during sleep is easiest for babies and toddlers) for a few days. The solution softens wax.  For maintenance, mineral oil and olive oil are favorite remedies. Place one drop daily in ears. In the office some pediatricians can use a water irrigation system (like a water squirter in your ear) to wash out the wax. The worst side effect is that the child’s shirt sometimes gets wet. Irrigation is a very effective for removing wax  in a school-aged or teenaged child who complains of difficulty hearing.

Some say wax evolved to help keep bugs and other debris from reaching deep into our ear canals. Case in point: one of my least favorite memories during residency is of picking out pieces of a cockroach entrapped in a child’s earwax!

Keep in mind the amount of wax you see on the outside of the ear is not indicative of the actual amount inside the ear canal. Chances are, the wax is not hard and does not block the ear drum. Even if there is a large amount of wax, it is unlikely to greatly affect a baby’s hearing unless the wax is stuck against the ear drum. Equally normal is that some babies and children don’t seem to produce any ear wax. If you are concerned about your child’s ear wax or about her hearing, have your pediatrician take a peek with a light.

If you find you are constantly cleaning your kid’s waxy ears, take heart. At least there won’t be any roaches “bugging” them.

It’s possible: Tricks for eating out with your toddler

Pack your child a healthy lunch

Local Peeps, come talk with us about Potty Training!