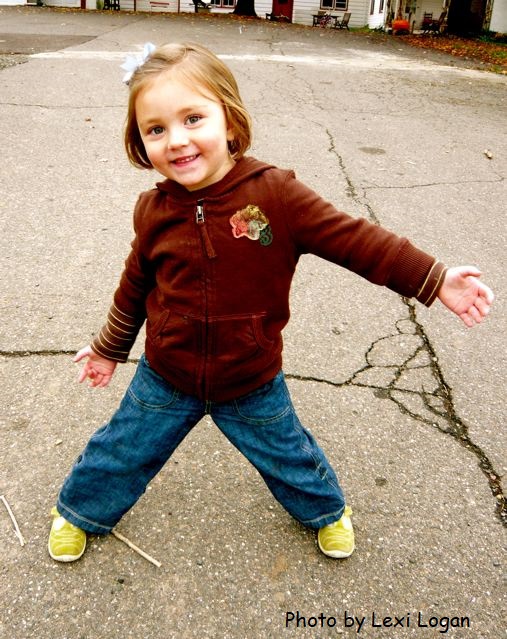 Recently I had the pleasure of taking a three-year-old neighbor out to dinner. My own kids and I greatly enjoyed our three-year-old friend’s conversation and antics so afterwards I decided to write about three-year-olds.

THEY HAVE GREAT IMAGINATIONS. My three-year-old friend was playing “Tinkerbell” and I was Tinkerbell’s mom. “So who are the boys (my kids)?” I asked her.  “Are they Peter Pan and the Lost Boys?”

“NO,” she explained, “we are NOT playing Boys right now, we are playing Tinkerbell. I live on Pixie Lane.”

Three-year-olds are great at pretending. The problem/charm is that they also often believe what they pretend. So to them, they really saw an elephant on the way to preschool that morning. They really “go to preschool” even if in reality they merely PLAY “preschool” at home. When three-year-olds tell “tall tales,” they believe what they are saying.

This same belief in the pretend world also makes them easily frightened. Refrain from watching any potentially scary show, including the weather channel, in their presence; a three-year-old may be afraid of a tornado that touches down half way across the country. They also can be very concerned about body integrity. A small paper cut might signal that their finger will fall off and may necessitate ten band-aids. Not surprisingly, nightmares are common in three-year-olds.

They are easy to teach because of their natural curiosity and their willingness to try what others are trying. In the deli, my three-year-old guest happily tried pickles because my kids were eating them. Three-year-olds behave better than two-year-olds because they follow rules more consistently as long as they feel somewhat in control. She chose which of my boys’ hand to hold when we walked across the parking lot because she was told to hold a big person’s hand. She handed her butter knife to me because “The waitress must think that I am BIG but really I am little. She didn’t know that!” She sat nicely in the booth and talked to us because my kids were doing just that.

Three-year-olds get the hang of waiting, taking turns, and sharing MUCH better than they do as two-year-olds. They start to play simple games with rules. But they are also very literal and it’s easy to forget what they do not know.  I recall my twins’ hysterical laughter when they were three and I referred to their “bare feet.” They insisted that they had “BOY feet, not BEAR feet, Mommy!” When we asked for a doggie bag after dinner at the deli, my three-year-old neighbor laughed hysterically over the image of a bag that looked like a dog, then at the thought of her dog getting the dinner remains. We explained that even though the family dog could eat the food from the doggie bag, she also could eat the leftovers the next day for lunch. This concept cracked her up, which in turn cracked US up.

I like to point out features of three-year-olds in my office to parents and caregivers. Yes, they can still be irrational, yes they can still have temper tantrums, yes, they can “get stuck” in an undesirable behavior pattern such as always crying at school drop-off (yet they have a wonderful day that starts after the parent’s car pulls away) or refusing to poop on the potty. Because three-year-olds have no sense of time, they don’t understand schedules and feel no sense of urgency to get to a birthday party before it’s over. They can develop irrational fears at the drop of a hat. They vacillate between wanting to be “big” and wanting to crawl back into the womb. But I encourage parents to take the time to enjoy their three-year-old’s charms and antics.

I still remember the “let’s pretend” game I played with my first born who would spend hours playing “explore outer space” where we would build a pretend spaceship out of sofa pillows, make maps to chart our journey, and go to Mars “to visit the Marshmallows.” Never again will (or should) your children hope to marry you. Enjoy their antics now… four and fourteen-year-olds are just around the corner.

Molluscum contagiosum: the little rash with the big name