The natural medicine cabinet in your kitchen 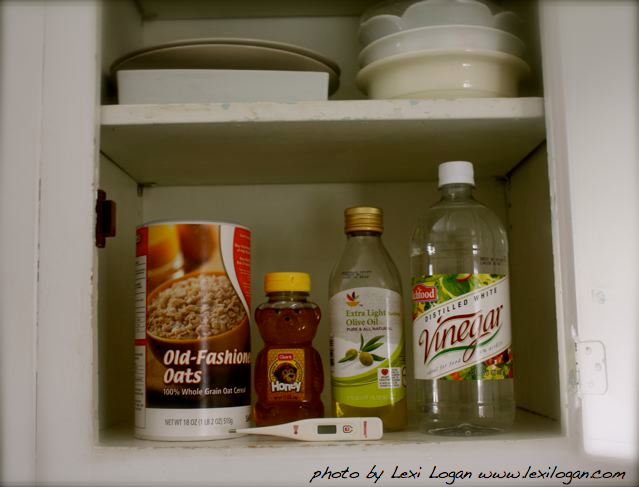 You may not think of your kitchen as a convenient pharmacy, but parents used common kitchen items successfully to treat various maladies long before CVS and Walgreens were invented.

Crisco– May not be healthy to eat, but smeared on skin, it’s an old fashioned but effective treatment for eczema or dry skin.

Oatmeal– Crush and put into the end of a hosiery sock. Float the sock in the bathtub for a natural way to moisturize skin.

White vinegar-If swimmer’s ear is suspected, mix rubbing alcohol one to one with vinegar and drop a couple drops in the ear to stop the swimmer’s ear from progressing (don’t put in if your child has a hole in their ear drum eg. myringotomy tubes).

Honey– Shown to soothe coughs-give a teaspoon of dark (buckwheat, for example) honey three times a day. However, NEVER give honey to a child who is younger than one year of age because it may cause infant botulism

Sugar: Mix sugar into weak tea (or your ginger tea from above) and give small amounts frequently to soothe your older child’s nausea and help rehydrate after vomiting.

Ice: Ice not only decreases swelling when applied to injuries, it can also be used to combat the itch of bug bites and poison ivy.

Kitchen sink: This is an excellent place to wash any cut, scrape, or bleeding wound under running water with soap. Immediately after a burn, rinse the burned skin under cold water for several minutes to limit the extent of the heat injury. Contrary to popular lore, DO NOT put butter on a burn. You may, however, put butter on your toast. In small amounts.

The dirt on tetanus

Raise a well-behaved child: set the stage while they are toddlers