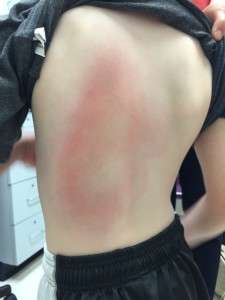 As we are in the middle of Lyme disease season here in the Northeastern United states, I thought I should address Lyme disease. I have diagnosed 8 cases so far this summer, seven in my office and one at a picnic, and what struck me in each case was how relieved the parents were to find out how easy it is to treat the disease when it is diagnosed early. It is important to treat Lyme disease in the early phase because this treatment prevents later manifestations of the illness (arthritis, meningitis, etc.).

In areas where Lyme disease is prevalent (New England and Mid-Atlantic states, upper Midwest states, and California), parents should be vigilant about searching their children’s bodies daily for ticks and for the rash of early Lyme disease. Tick bites, and therefore the rash as well, especially like to show up on the head, in belt lines, groins, and axillas (armpits), but can occur anywhere. I shower my kids daily in summer time not just to wash off pool water, sunscreen, and dirt, but also for the opportunity to check them for ticks and rashes.

Most kids do get the classic rash of Lyme disease at the site of a tick bite. The rash most commonly occurs by 1-2 weeks after the tick bite and is round, flat, and typically red. It can have some central clearing. The key is that the rash expands and becomes larger than 5cm. Untreated, it can become quite large as seen in the above photo. The rash does not itch or hurt. This finding is helpful because if you think you are seeing the primary rash of Lyme disease on your child, you can safely wait a day or two before bringing your child to his health care provider because the rash will continue to grow. The Lyme disease rash does not come and then fade in the same day. In fact, the history of a rash that enlarges over a few days is helpful in diagnosing the disease. Some kids have fever, headache, or muscle aches at the same time that the rash appears.

The second phase of Lyme disease occurs if it is not treated in the primary phase. It occurs about one month from the time of tick bite. Children develop a rash that looks like the primary rash but appears in multiple body sites all at once, not just at the site of the tick bite. Each circular lesion of rash looks like the primary rash but typically is smaller. Additional symptoms include fever, body aches, headaches, and fatigue without other viral symptoms such as sore throat, runny nose, and cough. Some kids get the fever but no rash. Some kids get one-sided facial weakness. This stage is called Early Disseminated disease and is treated similarly to the way that Early Lyme disease is treated.

If your child has primary Lyme disease (enlarging red round rash), the diagnosis is made on clinical presentation alone. No blood work is needed because it takes several weeks for a person’s body to make antibodies to the disease, and blood work tests for antibody response. In other words, the test can be negative when a child does have early Lyme disease. Therefore, treatment begins after taking a history and performing a visual diagnosis.

The treatment of early Lyme disease is straightforward. The child takes 2-3 weeks of an antibiotic that is known to treat Lyme disease effectively such as amoxicillin or doxycycline prescribed by your child’s health care provider. This treatment prevents later complications of the disease. While the disease can progress if no treatment is undertaken, in children there is no evidence of “chronic Lyme disease” despite claims to the contrary. Once treatment is started, the rash fades over several days. Sometimes at the beginning of treatment the child experiences chills, aches, or fever for a day or two. This reaction is normal but your child’s health care provider should be contacted if it persists for longer.

If not treated early, then treatment starts when diagnosis is made during later stages of Lyme disease and may include the same oral antibiotic as for early Lyme but for 4 weeks instead of 2-3 weeks. The most common symptom of late stage Lyme disease is arthritis (red, swollen, painful joint) of a large joint such as a knee, hip, shoulder. Some kids just develop joint swelling without pain. The arthritis can come and go. This stage is prevented by early treatment but is also can be treated with antibiotics.

For some manifestations, IV antibiotics are used. The longest course of treatment is 4 weeks for any stage. Again, children do not develop “chronic Lyme” disease. If symptoms persist despite adequate treatment, sometimes one more course of antibiotics is prescribed, but if symptoms continue, the diagnosis should be questioned. No advantage is shown by longer treatments.

Misinformation about this disease abounds, and self proclaimed “Lyme disease experts” play into people’s fears. If you feel that you need another opinion about your child’s Lyme disease, the “expert” that you could consult would be a pediatric infectious disease specialist.

For a more detailed discussion of Lyme disease, I refer you to the Center for Disease Control website: www.cdc.gov.

Spotted on the horizon: Roseola