How to transition to milk in a cup 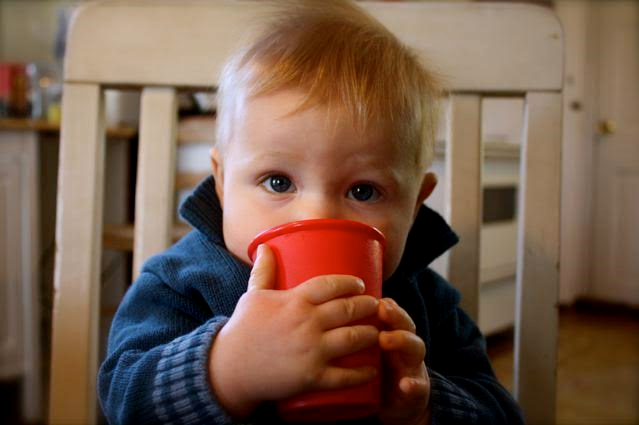 While “drinks from a cup” is often listed as a developmental milestone for one-year-olds, it is a good idea to start teaching this skill BEFORE your child’s first birthday. Go ahead and introduce a cup when you baby is around six months old.

Here’s why six months is a great time to start a cup:

We have an entire post devoted to sippy cups but the short of it is that even babies as young as 6 months can start learning to drink out of open cups. Parents have told me that their 6-month-old will pull their mom’s water bottle to his mouth and drink from it.

The origin of the non-spill sippy cup:

According to this article in the New York Times , mechanical engineer and dad Richard Belanger first developed his own non-spillable cup because he was tired of always cleaning up his toddler’s spills.  In other words, he developed the cups for parents with an aversion to mess, not as a “stepping stone” for kids learning to drink out of a cup. His non-spill cups were specifically for kids who already drank out of open cups but often spilled them. He eventually pitched his prototype to Playtex, and the rest is history: non-spillable sippy cups are now ingrained into toddler culture.

So, when parents of my patients lament, “My child throws the sippy cup away! He won’t suck from it!” I smile and answer, ok, take the vacuum seal or valve out or skip the sippy cup and  just give a regular open cup.

WHAT should you put in the cup?

Water is a great choice. It is healthy and does not stain so is easy to clean when your new cup-user spills it.

You can put formula or breastmilk in the cup if you want, but don’t worry if your baby won’t drink it. Remember, you are not replacing bottles or nursing yet, you are simply adding a cup.

After your child turns one year, you can put whole or two-percent cow’s milk (reduced- fat milk) in the cup. No need for toddler formulas. Your pediatrician will guide you as whether to start with whole or the two-percent.

How much milk do kids need in their cups?

Remember that once your child weans from breast milk or formula, she no longer receives a lot of iron through cow’s milk. In fact, the calcium in milk hinders iron absorption from food, so be sure to cap your child at 24 ounces of milk per day and give  iron rich foods.

Most juice, even 100% juice, has the same sugar content as soda (such as Coke or Sprite), so juice is not a great choice of beverage for kids. Children should eat fruit but most do not need to drink juice.

Do I have to mix cow’s milk in with the formula or breast milk to “get my child used to it?”

Not at all! Think about how you fed your baby solid foods.  You didn’t  have to, for example, start with cereal and then mix every other food into the cereal. Just start cow’s milk in a cup alongside your last supply of formula in a bottle or at the same time you are still giving breast milk. For social reasons and to make it easier for yourself later, offer “big kid milk” in cups and “baby milk” in bottles. Then when you stop giving formula, you won’t need to continue to give (and wash- ugh!) bottles anymore!

One trendy question we hear these days is: Can I give raw milk in the cup?

The answer is: NO.

Raw milk contains many bacteria, such as salmonella, Listeria, and E.coli.  The reason we pasteurize milk is to get the bacterial count down. Out of 121 dairy-related outbreaks in the US reported between 1993 and 2006, 73 (60 percent) were linked to raw dairy, despite the fact that only about 3 percent of the dairy products consumed in the U.S. was unpasteurized. These statistics prompted the American Academy of Pediatrics to issue a statement in 2013 recommending against raw milk.

If your  child won’t drink cow’s milk, that’s ok too. Cow’s milk is a convenient, but not a necessary, source of protein, fat, vitamin D, and calcium, all of which are found in other foods.

If your child is allergic to dairy or is lactose intolerant, you can offer almond milk, soy milk, or even no milk.

After one year of age, it’s fine if water is the only fluid your child drinks. He can get all of his nutrition from food. Liquid intake is more for hydration than for sustenance.

A word about vitamin D: Even though cow’s milk is fortified with vitamin D, continue to provide a vitamin D supplement. The recommended daily allowance of vitamin D intake starting at one year of age is 600 IU a day. Since most toddler/child vitamins contain 400 IU per tablet/gummy, most kids will take in the recommended daily allowance of 600 IU a day if they drink some milk and take any of the over-the counter chewable vitamins. If your child does not drink any milk or you prefer not to give a supplement, 600 IU a day can be achieved through yogurt or cheese that is vitamin D fortified as well as vitamin D containing foods such as salmon and shiitake mushrooms ( I know, I know… shiitake mushrooms are not usually a toddler favorite).

Beware of Grazing: Just as a “dieter’s trick” is to drink eight ounces of water prior to meals to curb the appetite, too much fluid = less appetite for solids. Grazing in the day or at night  hinders picky eaters from eating. Additionally, grazing milk promotes dental caries (cavities) because milk sugar constantly bathes the teeth. Even if your child initially drinks a bedtime cup of milk, remember to always brush his teeth afterwards and to eventually stop offering milk before bed. Your goal is to offer the cup with meals or snacks. Your child does not need a cup in between.

We hope this post quenched your thirst for knowledge about transitioning to a cup!

transition child to a cupstart a sippy cuphow to I transition from formula to cow's milkweaning your child to a cupgetting off bottlehow to wean off the breastmy child won't drink milk
October 6, 2016 by twopedsinapod

A lot of Pediatricians