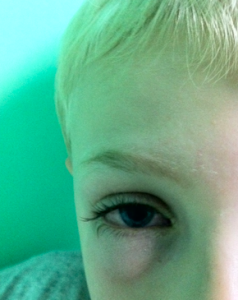 “I see green stuff all over my car and I park  in the garage,” a mom said to me today.

The pollen count is high on the east coast and with it comes green cars and  itchy eyes. Eighty  percent of the older kids I saw today, including those seen for routine check-ups, had red irritated eyes.

So what to do?  Pollen directly irritates eyes, so start with washing the pollen off. One parent told me he applied cool compresses to his child’s eyes. This is not enough- get the pollen off. Plain tap water works as well as a saline rinse. Filter the pollen out of your house by running the air conditioning. Some people will leave shoes outside the house and wipe the paws of their dogs in order to keep the green stuff from tracking into the house.

Oral medications do not help the eyes as much as topical eye drops. Over-the-counter antihistamine drops include ketotifen fumarate (eg. Zatidor and Alaway). Prescription drops such as Pataday or Optivar add a second ingredient called a  mast cell stabilizer. Avoid use of a product which contains a vasoconstictor (look on the label or ask the pharmacist) for more than two to three  days to avoid rebound redness. Contacts can be worn with some eye drops– first check the package insert. Place drops in a few minutes before putting in contacts and avoid wearing contacts when the eyes are red.

Hopefully allergy season  will blow through soon. After all, as a couple teens pointed out-prom is around the corner and allergies can make even the young look haggard. One teen male told his mom that he shaved today  because having a beard and blood shot eyes made him look THIRTY years old.

“There’s a monster under my bed”: all about nightmares, night terrors, night wandering and bedwetting

When a peer dies: How to help your grieving teen